Due to unforeseen circumstances, the main pool will be closed for the remainder of the day, Saturday 2/4.  The spa area will be open until 3:50 pm.

On Sunday, opening hours for the main pool may be delayed. Please check back for updates. 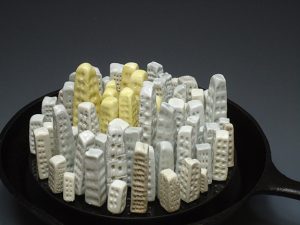 Rosewood Gallery in Kettering, Ohio is pleased to announce the HWD (Height, Width, Depth) 2020 Invitational Sculpture Exhibition taking place from August 17 through September 25, 2020. Twenty-four Dayton-area artists who have participated during the past ten years in Rosewood Gallery and the CitySites public art program were selected. Featuring recently created three-dimensional artworks, HWD is on view in-person at Rosewood Gallery, as well as in this virtual gallery.

The following artists will be at the gallery to talk with visitors about their work - Bob Coates on September 10 from 6-7 p.m. and Glenda Miles on September 16 from 12- 2 p.m.

The Joan W. McCoy Memorial Art Fund is presenting awards, including a total of $600 for the Virginia Krause Hess Award for Excellence in Sculpture to winners Landon Crowell (first place) for his piece, 'You shimmed us up to remain true. Without you level is very elusive,' 2019; Jon Barlow Hudson (second place) for his piece, 'As Above – So Below,' 2018; Donald Williams (third place) for 'The Earth, the Sky, the Fish of the Sea, the Birds of the Air Totem,' 2019. The fund will also present a $150 People’s Choice Award. Scroll down to view the exhibition and vote for your favorite artist in the People's Choice Awards!