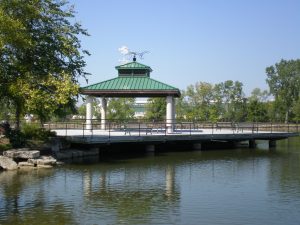 Welcome to The City of Kettering's Department of Parks, Recreation and Cultural Arts!

Our goal is quality service focused on community

We are here to provide quality parks, recreation and cultural arts that make Kettering home.

We envision an exceptional and engaging parks, recreation and cultural arts department that improves the quality of life for everyone in our community.

We make the experience successful for each customer through providing quality service focused on community.

Since the department was established in 1966, we have been recognized both nationally and locally for many of our parks, facilities, programs and initiatives, including several times as a National Gold Medal Agency by the National Recreation and Park Association. In 1996, we were the first parks and recreation department in the state of Ohio to become nationally accredited and have maintained this prestigious status to the present day.

We provide parks, recreation and cultural arts spaces, places and programs through our 21 parks on over 350 acres, fitness and wellness activities at our Kettering Recreation Complex and Kettering Fitness and Wellness Center, and specialized experiences for all ages at Adventure Reef Water Park, the Kettering Ice Arena, Rosewood Arts Centre, and the Habitat Environmental Education Center. From skateboarding at the Rob Dyrdek/DC Shoes Skate Plaza, to enjoying a live concert at the Fraze Pavilion, to sports leagues at Delco Park, to community events at the historic Polen Farm, we are proud to offer something for everyone!

As a department and a city, we strive to provide equitable and meaningful access to all of our services.  We work closely with the City of Kettering's Compliance and Inclusion office, the Kettering City Schools, and various community partners to ensure opportunities for all people. Through the Kettering Parks Foundation, financial assistance is available to residents to remove financial barriers for participating in fee-based programs and services.

We welcome your feedback! We are dedicated to continuous improvement in the quality of our facilities, natural resources, programs and services. Visit our Feedback page to provide information about your experience, or our Contact Us page  to find department contacts. Several advisory committees offer guidance on PRCA services, from youth programs to public art.  We regularly conduct statically sound resident surveys to assess priorities and needs, including the most recent 2017 Community Survey (view the executive summary). Previous survey results include the 2013 Community Survey (View the executive summary) and facility specific surveys on the Kettering Ice Arena in 2016 and Rosewood Arts Centre in 2014 (view this information on our Current Projects page).

The City of Kettering Parks, Recreation and Cultural Arts is accredited through the Commission for Accreditation of Park and Recreation Agencies (CAPRA) and the National Recreation and Park Association (NRPA) based on an external review of the agency’s overall quality of operation, management and service to the community.

The National Gold Medal Award honors communities throughout the United States that demonstrate excellence in long-range planning, resource management and innovative approaches to delivering superb park and recreation services with fiscally sound business practices. The National Gold Medal Award Program is governed and administered by the American Academy for Park and Recreation Administration (AAPRA) in partnership with the National Recreation and Park Association (NRPA).

Upon entering a City of Kettering recreation facility or grounds, you are a participant of the Parks, Recreation and Cultural Arts Department and are required to abide by the rules of the department. We are here to provide quality parks, recreation and cultural arts that make Kettering home. Your cooperation and consideration of this Code of Conduct helps ensure that all participants can enjoy our programs, facilities and parks.

2. Respect the rights of other users.

3. Comply with requests from City of Kettering officials or staff members.

4. Proper attire, including shoes and shirts, must be worn inside of facilities at all times except within locker rooms and swimming areas.

5. Bicycles or motorcycles must be parked in designated areas.

6. Animals are not permitted inside facilities; service animals are welcome.

8. The following actions are prohibited in within City of Kettering programs, parks, and facilities:

PRCA through the decades

Our big moment! After the department was established in 1966, we focused on major facility development based on the results of our very first citizen survey, as well as the expansion of several of our parks.

The department established long-range goals during its second decade through a Community Facilities Plan. We also saw further park expansion and the establishment of more recreation facilities like the Kettering Recreation Complex in 1973 and the Kettering Ice Arena in 1974. We continued to involve our citizens through surveys, the new Senior Citizen Advisory Board and won our first NRPA gold medal in 1977! Not bad for an eleven-year-old.

During the 80’s, PRCA continued on its totally rad trajectory. The Kettering Parks Foundation was established in 1982, and we won an OPRA award for developing the Delco Park BMX track that same year. In 1983, the city leased Rosewood Arts Centre from the Kettering City School District and hired its first Cultural Arts Superintendent, Connie Campbell, the following year. In 1986, we added the historic Beavertown Cemetery to our Parks Division and also moved our Fourth of July celebration to Delco Park, where it became the Go Fourth! event we still know and love. As the decade closed, so did the Stroop Road Pool – to make way for a new water park at the KRC!

In the 1990’s, PRCA was all that. We started the decade by opening the Charles I. Lathrem Senior Adult Center, part of the Kettering Recreation Complex, in 1990. A year later, Fraze Pavilion for the Performing Arts opened, with the great Marvin Hamlisch doing the honors! The 4,300 seat venue remains one of the top amphitheaters in the U.S. and Kettering’s home for Summer’s Best Music. Our 1990s PRCA team didn’t stop there – in 1996, we became the first parks and recreation agency in the state of Ohio to become nationally accredited through the National Commission for Accreditation of Parks and Recreation Agencies, a status we have maintained for over two decades.

As the world entered a new millennium, Kettering remained the (avocado) toast of the parks and recreation world. Facilities and programs receiving top honors during this decade included:  Kettering Ice Arena (Professional Skater’s Association’s Excellence on Ice, 2000-2013), PRCA’s second CAPRA accreditation, CIL Center (OPRA award, 2003) and the Art on the Commons festival (Sunshine Artist Magazine, 2004). In 2002, Kettering played host to the very first International Stone Carving Exposition in the United States, Kettering Rocks. The sculptures remain part of the city’s robust public art collection. In 2003, the City developed the Land Lab Program in cooperation with Kettering City Schools – the program was then held at the Southdale Nature Center and Pondview Park. 2005 was a year of new beginnings – we saw the Kettering Fitness and Wellness Center open, as well as the Rob Dyrdek/DC Shoes Skate Plaza.

Toward the end of the decade, in November 2008, the bond levy was passed. This bond levy funded renovations of all neighborhood parks, the redesign of Adventure Reef (formerly Water Raves Water Park) and paved the way for a new fitness wing and additional group exercise studios at the Kettering Recreation Complex.

Although this was a decade of uncertainty in the wake of the Great Recession, PRCA was able to continue providing top-notch programs and facilities to our Kettering community. Projects funded by the bond levy came to fruition in 2011, most notably:

In 2013, not only were extensive renovations and accessibility improvements completed on Pondview Park, but the former Southdale Nature Center became the brand-new Habitat Environmental Education Center.

We remain committed to serving the community through the excellent programs and facilities PRCA has become known for throughout our fifty-five year history. We’re happy to be starting off the decade with major upgrades to our parks and facilities – renovations are in the works for several indoor spaces, including Rosewood Arts Center. Construction is also moving forward with Gentile Park in fall 2022 through 2023.

Refund requests must be made within two weeks of a registered program’s end date. For a full refund, requests must be made at least three days prior to the start of the program; otherwise a prorated refund of up to 75% will be offered. Special consideration may be given for life-altering situations and one-day experiences.

This policy does not apply to facility rentals or pass purchases.