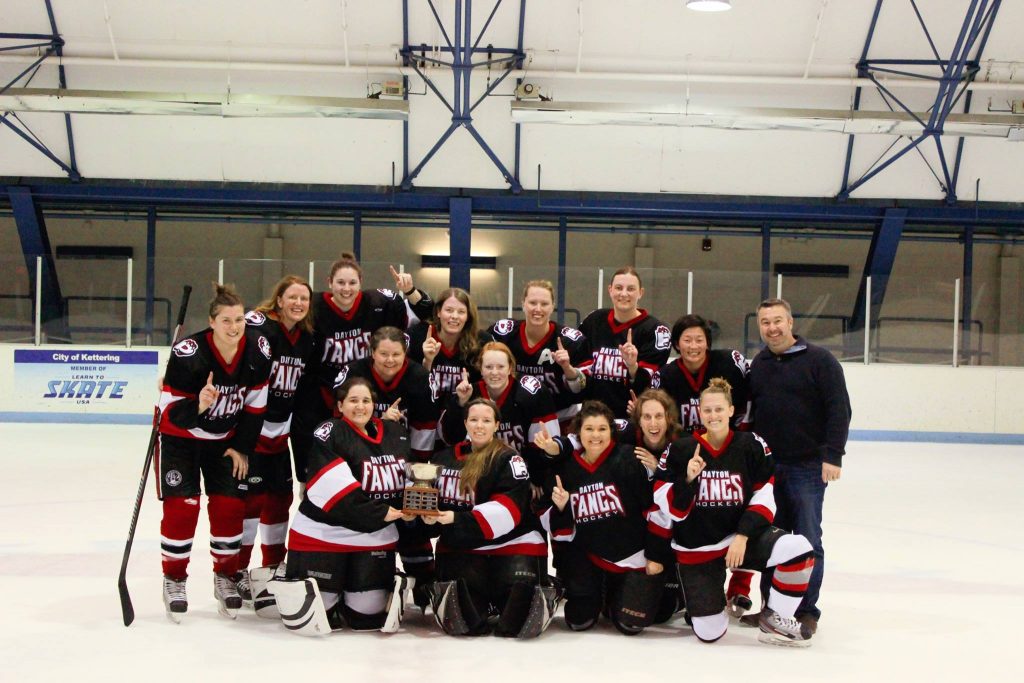 It’s officially Olympics month! The 2018 Winter Games kick off on February 9 in Pyeongchang, South Korea. Olympic dreams and the joy of winter sports aren’t reserved for the elite levels – they start in community recreation facilities like the Kettering Ice Arena. All February long, we’re highlighting some of the dynamic teams and individuals who call the KIA home.

First up, meet the Dayton Fangs, the Miami Valley’s only all-women’s hockey team! The Dayton Fangs is part of the Pennsylvania-Ohio Women’s Hockey Association (POWHA) and is a travel team that competes against teams from Pittsburgh to Indianapolis. The Dayton Fangs is for women 18 and up with varying skill levels and experience.

The Fangs was founded in 2005 and began with only five players. Although the Fangs is a tight-knit group, players rotate in and out of the roster each year. “There is currently only one player still with us from the original team, most of them have moved away or ‘aged out,’ so to speak. We usually seem to get one to three new players each year, and usually lose one to three players every year,” said team president, Renee Buck. “We get a lot of players that are transplants for work, or here temporarily with the US Airforce, or school at Wright State or the University of Dayton. Many women will take a year off here and there to start/grow their family! As with this year, we sometimes, unfortunately, lose some to injury.”

Buck finds the team camaraderie both fun and rewarding. “This is my first year as president, but it’s my fourth season overall. I moved here as a transplant for work and was delighted to find a women’s team. The most rewarding part for me is the social aspect. We have a lot of fun and camaraderie during the season, especially road trips, and most of us have made lifelong friends while playing for the team!”

Want to learn more? “Anyone interested is welcome to come by Kettering Recreation Complex and check out our Tuesday night skates. We play a scrimmage against a group of guys at 8pm,” Buck said.

As for the future of both women’s hockey and hockey in general, Buck said, “Hockey is and continuing to grow across the board in the US. According to USA Hockey, there were 75,832 girls and women registered, which is up 32% from the 2006-2007 season. Over the same timeframe, boys’ and men’s registrations increased by 19%. So, yes, gaining popularity! And always, we must predict that Team USA will come home with GOLD in both Men’s and Women’s!”