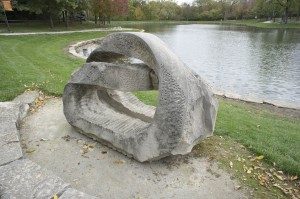 Japanese artist Keizo Ushio’s stone carving is recognized throughout the world for his mastery of the difficult technique in carving intertwining ribbons of stone and three-dimensional circles. This Indiana Limestone sculpture of intertwining ribbon of limestone incorporates the symbol of love.

Keizo Ushio was born and currently resides in Fukusaki Town, Hyogo Prefecture, Japan. Keizo is a member of the Japan Artists Association and the Hyogo Prefecture Sculptor Association. He lectured at the Kyoto Educational University and Awaji Architecture School. In addition to these accomplishments, he was vice chair and coordinator for the Nisiharima International Stone Sculpture Symposium in 1995 in Japan.

Keizo Ushio has been awarded numerous honors for his sculptures, which reside in countries such as Japan, India, Spain, Australia, Norway, Iceland, Germany, Bondi and Tasman Island.