Matijcio wrote: “There is certainly no shortage of excess amongst a privileged class where money is no object, but this is a rarefied realm that most often perpetuates the same economic models that jettison all that which does not produce profit in the most immediate, aerodynamic way. The work in HWD alternately twists, warps, folds, skews and transforms – evidencing and amplifying its quintessentially human manufacture.”

Matijcio also selected the winners of the United Art and Education Awards, totaling $1,100 (to be announced during the artist reception). 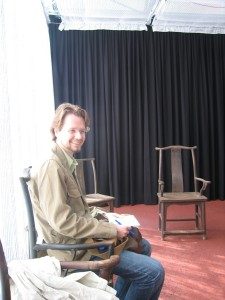 Matijcio was honored in 2010 with a prestigious Emily Hall Tremaine Exhibition Award for his project paperless. In the summer of 2011 he was chosen from an international pool of candidates to participate in curatorial residencies in Gwangju, South Korea (as part of the Gwangju Design Biennale) and Berlin, Germany (as part of the Haus der Kulturen der Welt’s SYNAPSE project exploring the relationship between art & science). In the fall of 2012 he curated the 4th edition of the Narracje Festival in Gdansk, Poland, which involved a city-wide program of installations, interventions and video projections upon the surfaces of historic buildings. Matijcio’s 2013 essay “Nothing to See Here: The Denial of Vision in Media Art” was accepted into the RENEW: Media Art Histories Conference in Riga, Latvia.

Matijcio has also lectured on theory and criticism at the University of Manitoba, written for numerous catalogues and journals (including the Guide to the 27th Sao Paulo Bienal), and was commissioned in 2003 by the Robert Mapplethorpe Foundation to curate one of their first online exhibitions.

“In the accelerating era of so-called digital evolution, sculpture has never seemed more antiquated. When progress is equated with shedding physical baggage (and being) in favor of a weightless virtual existence in an amorphous, yet omnipresent cloud, what purpose is to be served by material objects that fulfill no practical function other than to be? And yet it is precisely in, and of this exile that makes work like that which we see in this year’s HWD all the more timely and necessary. Rather than succumbing to a societal pressure to streamline and minimize, these artists embrace a neo-baroque approach to making that revels in ornamentation, excess, melodrama and materiality. To do so is contrarian to the times and crucial to the psychological well-being of a populace too often corralled into thinking only about a future existence at the expense of reflection; reversing the “inefficiency” of taking time to look back over one’s shoulder and linger in the mutations of memory. There is certainly no shortage of excess amongst a privileged class where money is no object, but this is a rarefied realm that most often perpetuates the same economic models that jettison all that which does not produce profit in the most immediate, aerodynamic way. The work in HWD alternately twists, warps, folds, skews and transforms – evidencing and amplifying its quintessentially human manufacture. Aaron Smith is especially, and intriguingly iconoclastic in his acts of metamorphosis – turning tired objects like a prayer bench and player piano into a guitar and birdcage respectively. In concert with Smith’s instrumental reassignment, Jason Tanner Young conducts a more lyrical and at times macho manipulation of wood and structure – bending the history and integrity of wood into enigmatic riddles. Chuck Sharbaugh’s treatment of wood is ostensibly more reverent upon first approach, but while he maintains an ecumenical grace to his material and craft his subject matter upon the tabletop suggests a more mysterious, somewhat disorienting flight. Artists Carol Boram-Hays and Sarah Hydell further elaborate the nascent theatricality that informs much of this work and their fellow artists in HWD, moving between post-industrial mutation and ceramic puppetry to suggest an unstable identity in the midst of re-formation. As a whole, HWD assembles work that grants its viewer permission to get lost in these knots, tangles and meanderings of uncertainty. It is not about spotless problem solving or providing direction, but rather about the delight of getting lost and rediscovering what we left behind too soon.”