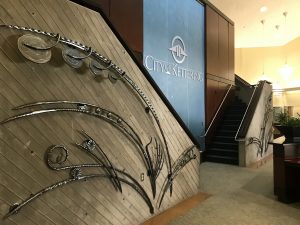 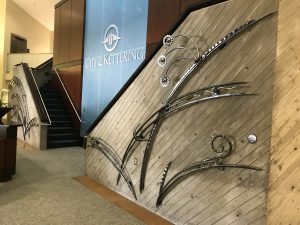 Hamilton Dixon has created forged steel sculptures throughout the Dayton area, and his artwork is collected in numerous private and public commissions.

“The most fluid design is sometimes the most complex thing to make—that’s what fun to me—to make a piece of steel look like it is a flowing, organic shape,” said Dixon. “There is a lot of satisfaction in that, and it gives me a feeling of worth.”

Dixon began welding metal on an offshore oil rig in the 1980s, and continued to learn metal working techniques at the Turley Forge School in Santa Fe, New Mexico.  He relocated to Dayton in the early 1990s and has since created three-dimensional artworks at major landmarks in the region, including at the Dayton Art Institute, the Dayton International Airport, the University of Dayton, and more.  His practice includes functional works, sculpture and jewelry.