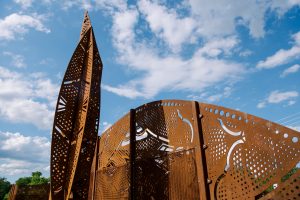 Kettering’s CitySites is a percent for art program. It recognizes artistic excellence, accessibility to the arts, and the positive impact creativity has on our community. Learn more about the CitySites collection. 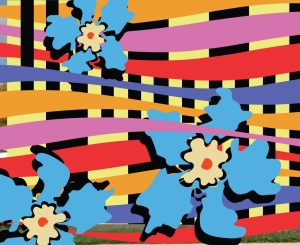 Rosewood Arts Center is the location of CitySites inaugural mural, the first in a new initiative to create public murals in partnership with the community in Kettering.  The mural was designed through a partnership with the Dayton Printmakers Cooperative (DPC), students in the Kettering City Schools, Kettering residents and artist Atalie Gagnet. View more information about the project.

The 2021 Miami Valley Cycling Summit took place in May 2021 throughout Kettering!  To commemorate this special program, the Kettering Arts Council and Kettering residents created short videos about the artwork and architecture that you can easily bike to all over the city! Visit the video gallery.

The City of Kettering Parks, Recreation and Cultural Arts Department operates the Percent for Public Art Program with the help of this citizen advisory committee.

Questions on Artists, Artwork Locations or Other Information
Contact Rosewood Arts Centre at 296-0294